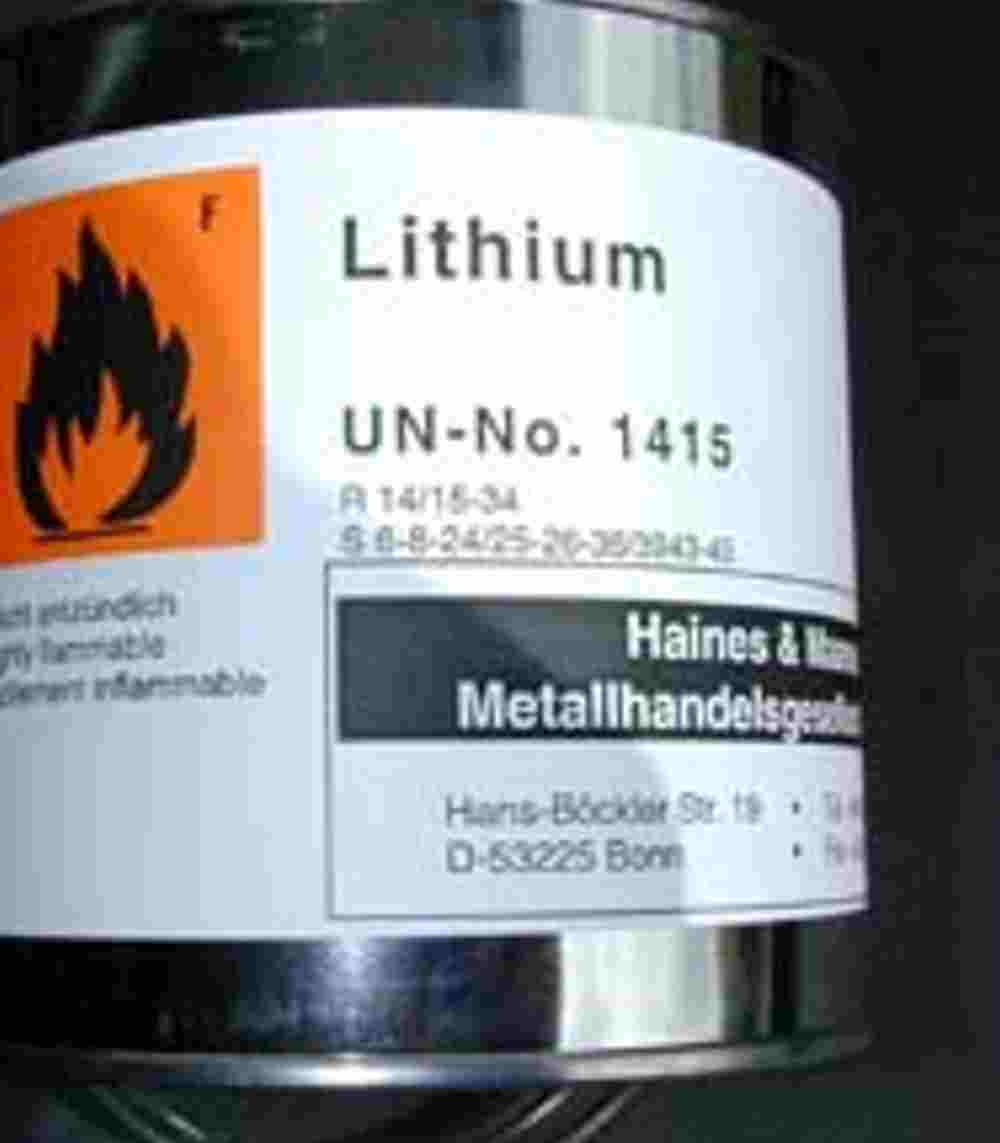 If you would like to buy lithium or find our our current lithium price please contact us.

*** We do not sale lithium to private persons.

Lithium makes up abt. 0.006% of the Earth’s crust. It primarily occurs in close association with aluminium ores like amblygonite, lepidolite or petalite. These minerals have a lithium content of about 9%. A rarer lithium ore is kryolithionite with the highest lithium content of all minerals. Lithium minerals occur in many silicate rocks but usually only in low concentrations.

Lithium compounds can be used for many different applications. The world’s annual production is quoted at 39000 t with estimated worldwide reserves of 7.3 million t. It was first commercially used in the 1920s as an alloying component with lead for the production of hardened bearings.

In larger quantities 34 lithium compounds are available at present. Lithium carbonate is for example used for glazes and fluxes for the production of enamel. Lithium fluoride is used for glass which is transparent to ultraviolet light and for the coating of optical lenses. The most frequent application is however the use of lithium stearate as gelling or thickening agent for oils in order to convert these into lubricating greases.

These greases offer an excellent temperature stability (>150°C) and a lubricity down to -20°C. End of the 1940s pharmacologists found out that with the daily administration of small doses of lithium carbonate antidepressive effects on corresponding diseases could be achieved. Due to the good thermal conductivity and the large liquidity range lithium is used as cooling fluid in nuclear power plants. In form of various battery types lithium is used as electrode material. In the non-rechargeable lithium battery the anode consists of lithium. Due to its low electrode potential a lithium half cell is compared with other half cells particularly suitable as battery electrode. The cathodes in lithium batteries can consist of many various materials like manganese(IV) oxide or iodine.

The lithium iodine battery is used in cardiac pacemakers. In the efficient rechargeable lithium ion battery the anode contains a lithium metal oxide whereas the cathode consists of graphite. As electrolyte lithium salts like lithium hexafluorophosphate in a water-free solvent are used. The even more efficient lithium polymer battery contains the same electrode material. However, in this case the electrolyte does not consist of a liquid but of a foil with an electrically conductive polymer.

The lithium-containing mineral petalite was first found by Jose Bonifacio de Andrada end of the 18th century but its discovery is attributed to Johan August Arfwesdon. In 1871 he analysed mineral findings and ascertained in spodumene and lepidolite the presence of a foreign element. In the year 1818 Christian Gottlob Gmelin noticed for the first time that lithium salts produce a reddish flame colour. Both scientists tried to isolate this element from the minerals but were not successful in the following two years. While both scientists failed there were two further scientists Sir Humphrey Davy and William Thomas Brande who also tried to isolate this element in 1818.

By means of the electrolytic method they were able to isolate the element from lithium oxide for the first time. In larger quantities lithium was then produced in 1855 by Augustus Matthiessen and Robert Bunsen by electrolysis of lithium chloride. In 1923 the first commercial production took place at a German metalworking company, also by electrolysis, in this case a melt of potassium- and lithium chloride. The German metalworking company is known today under the name GEA Group. Lithium organic compounds were synthesised from mercury compounds by Wilhelm Schlenk in 1917.